Waterfowl Hunting at its finest

The Delmarva Peninsula is the wintering grounds for one of the largest, most diverse populations of waterfowl found anywhere, including the largest concentration of Greater Snow Geese in the country.

The lower portion of the Peninsula is bordered on the east by the Atlantic Ocean and on the west by the Chesapeake Bay. The inland is sparsely populated and consists mainly of farmland and timber.

The Chesapeake has long been famous with hunters, writers, and photographers for its abundance of waterfowl. Paintings of Canvasbacks fighting a hard nor-wester and pictures of market hunters standing behind a mound of divers are common scenes to most waterfowl enthusiasts. 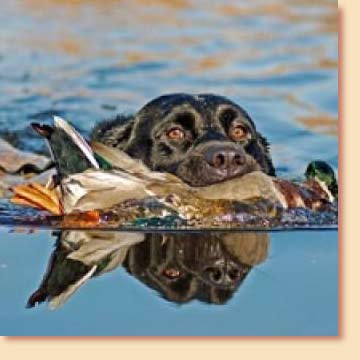 The Seaside of the peninsula, from Ocean City, MD south to the mouth of the Chesapeake is a series of barrier islands. With the exception of a small naval facility just South of Chincoteague, these islands are undeveloped and consist primarily of wildlife refuges. These refuges, along with the marsh and bays that separate them from the mainland, provide excellent habitat for a wide variety of waterfowl. Birds typically found in the area include Gadwall, Widgeon, Pintail, Shoveler, Blackduck, Dippers, Atlantic Brant, Snow Goose, Shell duck, Hairhead, Oldsquaw and Scoter. Other regulars include Canada goose, Blue Goose, Bluebill, Bluewing and Greenwing Teal. We do encounter Cans, Redhead, Goldeneye, and Eider but not on a regular basis. .

Many things have changed over the years. The days of the market hunter are long gone and the days of baiting are supposed to be long gone. In the late 1960's a federal game warden, by the name of Willie Parker, opened shop on the Eastern Shore. He had the fines raised from $50 max to $500 minimum and took a serious interest in violators. This caused many hunters to pack up their guns and go home and many others to have their guns packed up for them. Unfortunately, old habits are hard to break and baiting has remained a way of life for some locals. The federal guys upped the ante on baiting, making the maximum fine $15,000 plus jail time. That will surely stop it, Right? 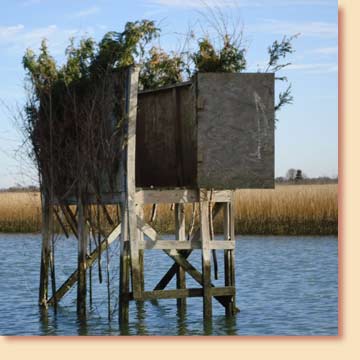 Be that as it may, there are other alternatives to spending long, boring days in a nonproductive duck blind or spending long, boring nights in jail for hunting over bait. There is such a wide variety of birds and such a vast area, if one thing is not working there is bound to be something that will.

If the Puddle Ducks aren't flying, the bays are full of Divers and the sounds have plenty of Sea Ducks. Snows normally fly to the fields in late morning and return near last light. Redbreasted, common and hooded Mergansers travel the creeks in search of moving schools of bait fish. Atlantic Brant move with the tide and regardless of what the weather does there is going to be a change of tide. One of the advantages of hunting the coast is the tidal movement. These tidal changes cause most of the waterfowl to move throughout the day. The big ducks will use the open bay at low tide, then move throughout the day. Divers seek their preferred depths throughout the bay as the tide changes and even Sea Ducks will move when different tidal currents disrupt their feeding. Unfortunately severe high or low tides can seriously affect the hunting by restricting your ability to get to certain blinds or by covering the marsh and flooding out many blinds. But, as mentioned before, with the wide variety of waterfowl in the area there is always a "Plan B".

There are also many things that have remained the same over the years. The wetlands on the lower peninsula have remained relatively unspoiled. The year round resident population in many areas is actually less now than it was in the late 1800's. Waterfowl populations have not only stabilized, but are increasing to the point that some species are at an all time high. Although modern day methods of hunting waterfowl are not as effective as the methods of the past, such as traps, puntguns, dynamite, hunting at night and baiting (nothing brings a bunch of birds together like a couple hundred pounds of corn) hunters can still enjoy a great days hunt in the marsh with the possibility of a combined limit of well in excess of 20 birds. That limit included, at the time of this writing, 6 regular ducks, 5 mergansers, 7 Sea Ducks, 2 brant, 2 Canada Geese and 15 Snow Geese. At this time there is talk of increasing the Brant limit to four birds and removing the limit on Snow Geese altogether. In addition to this there is swan by permit and a very liberal rail limit (check Virginia game laws for specific dates, bag and position limits). 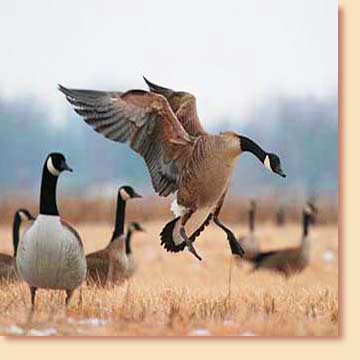 Hunting the saltwater marshes is very different than the flooded timber and grain fields inland. There are seldom any trees, bushes or banks to hide behind. Most blinds are constructed in the open marsh, where marsh grass is seldom over one foot high. Hunters must be well camouflaged, stay very still and rely on decoys and their location. The location must be right for the wind, tide, temperature, and species of birds you are hunting. Calling is not a "Thing" in this area. Mallards are a domestic bird on the lower shore. They waddle through town and congregate in the harbors. You can blow the horn in your vehicle and a mallard will come, but I have yet to see someone successfully call a Black Duck. I have had a few hunters that think they called in a duck and many more that have scared everything out of the marsh but the seagulls. Some exceptions to my calling theory are Canada geese, Snow Geese and Divers. One thing that helps in calling these birds is that they are relatively easy to identify. Blowing a mallard call at a Widgeon is like talking Chinese in a Mexican restaurant, nobody knows what is going on. Canada Geese are large, noisy and easy to identify. Divers fly low over open water and all seem to speak about the same language, and even I can identify a Snow Goose. With a little practice all 3 birds call well at a distance, but as soon as the birds see your spread you are best to leave it alone.

The early part of the season, from mid Nov. through most of December, usually offers the most shooting. Although we have killed all the species mentioned on opening day, you are more likely to encounter Brant, Black Duck, Dippers, Snow Geese and Mergansers. This is a great time to work your dog, enjoy the weather and work on your pass shooting. Some of our best hunting this time of year takes place on 60 degree days with a light breeze. As the season progresses the mix of birds improve and they often have better color. It is usually a tougher hunt in the late season, but severe weather can make smart birds do dumb things. Cold and wind can help in the late season, rain never helps.

Most, if not all ducks wintering along the Atlantic coast are seafood connoisseurs. Depending on the species, their diet can consist of clams, shrimp, crabs, fish, snails, mussels, and saltwater aquatic vegetation. This can give our birds a more gamey taste than those feeding on grain and washing it down with fresh water. This doesn't mean a bad taste. These are the same birds that the market hunters shipped by the thousands to restaurants in Philadelphia, New York, and other areas throughout the Northeast. But they definitely don't taste like chicken.

Many of our ducks, if properly cared for and not over cooked taste much like a good cut of roast beef. Seaducks taste like liver, Mergansers taste like fish. Some people like fish and liver, some don't.

To achieve the best taste from your birds they should be kept cool and cleaned as soon as possible. Breasting, rather than plucking some of the more flavorful ducks can also help.

If you decide to hunt the lower eastern shore I recommend you use a guide, for 2 reasons. First, the bays are a very unforgiving place in the winter. The shallow bays which are covered with combination of oyster rock, sandbars and soft mud, are difficult to navigate for even the local watermen. Add the unpredictability of winter storms and the possibility of unusually high or low tides to a very desolate area and you could be spending a lot more time in the marsh than you expected. The second reason is that I run a guide service and I feel we will both do a lot better if you come with us.

All of these birds are very common in our area, this combined with the possibility that almost any species of waterfowl may fly into your spread is no doubt what keeps many hunters returning year after year.